Schedule a visit or discuss any of your queries with us. across the country, in keeping with some ambitious promises, at least one of them has been making strides.
Navigant Builders, developers of Windsor Estates, a community that will boast 152 homes when finished, in the Republic Park vicinity, say it is making significant progress.
Many remember Windsor Estates from the first Caribbean Premier League (CPL) where the Guyana Amazon Warriors sported the brand on their playing jerseys, but according to CEO, Danny Sawh, he has no plans for his brand to just be remembered through cricket.
Last week, Sawh took Kaieteur News on a tour of the community, the first phase which he expects to be completed by the end of this year.
According to the developer, 55 homes have already been completed, with close to 35 families already occupying residences within the development. He explained that by June of this year he expects as many as 110 houses will be finished.
During the walkthrough, Sawh also gave a glimpse of the sophisticated Infrared Security System that mounts the 7-foot fence surrounding the compound.
He explained that since the installation of the infrared system, there has yet to be a break-in. “The community fell victim to three burglaries prior to installing the infrared system.  Security for the residents has always been a top priority in our original concept and planning of Windsor Estates. With the infrared system, it effectively adds an additional five feet to the top of our fence by alerting our internal security team to the exact location where the intrusion took place.” He explained that this allowed the development’s armed security personnel to be dispatched to that location.
The three intrusions Sawh mentioned happened earlier last year, leaving more than 20 home owners that were living in the development at the time, quite concerned about security.

Wide-angled views of two sections of the gated community.

Experience a new style of living in Guyana

Windsor Estate had a press conference in Guyana promoting our much buzzed around project “North Haven” and “Esplanade” which attracted a lot of local folks.
We are creating affordable housing in Guyana with US style living standards. 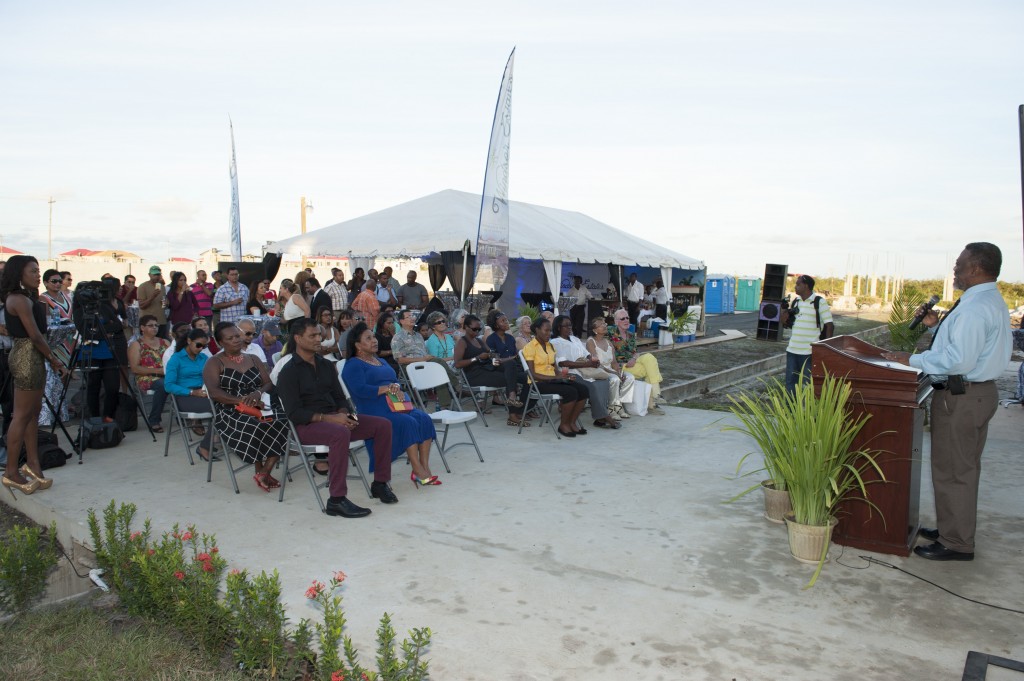 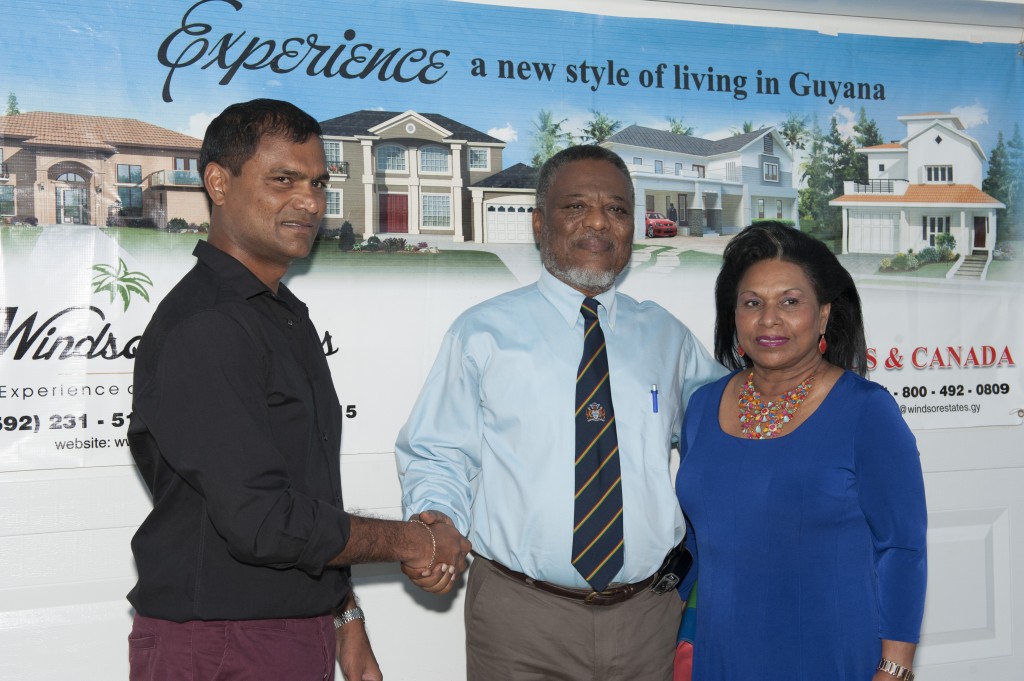 [www.inewsguyana.com] – Windsor Estates on Saturday (November 23) turned the key to a fully furnished model house at the formal launch of the Windsor Estates Housing Development even as it continues to boast of the provision of the best quality of houses in Guyana with the objective of introducing a new quality of living.

At the event at Peter’s Hall, East Bank Demerara, Prime Minister Samuel Hinds along with his wife were given a tour of the $38 million furnished home in ‘North Haven’ which is expected to accommodate over 100 houses in the gated community. The 3100 square foot home is named ‘The Heritage’.

He extended profound gratitude to the developers of the housing project stating that it was certainly gratifying to see such development taking place. The Prime Minister recalled when his Government took Office that there was widespread squatting.

Hinds said his Government had to focus at the time on getting the thousands of people and their families settled. He said since that has been accomplished, it paved the way for these kinds of development.

He said Windsor Estates is an example of how far housing sector has advanced. “I am very gratified to know that we have been able to manage growth and development to see this type of housing developed” Hinds added.

Windsor Estates’ Chief Executive Officer Danny Sawh said that his company was one the largest real estate developers in the New York/ Tri State within the United States of America and the decision was made to invest in Guyana, by offering customers, quality homes at reasonable costs. The company’s website said the first phase of its gated community offers “a more affordable living whilst still enjoying the benefits of having twenty-four hour security at the gated entrance, street lighting and night vision CCTV cameras strategically placed in various areas of this development to give residents more peace of mind.”

The second phase, ‘Esplanade’ which is close to North Haven will comprise about 80 homes.  The company’s houses range in price from $22M to $80M.  This first phase is expected to be completed in another 18 months.

This area will also have its own well-manicured recreation park, swimming pool, showers and changing rooms, kids playground, water feature, park benches and a walking track.

Windsor Estates Development is envisioned to be a futuristic premium residential community, providing a superior living environment parallel to the elegance of any other residential gated community in North America.

Windsor Estates, a multibillion-dollar housing scheme, was officially launched in Guyana on Saturday, with Prime Minister Samuel Hinds being the first person to get a tour of one of the eight North Haven model houses.

After touring the “Heritage”, a luxurious 1900-square-foot two-storey, three-bedroom house, inclusive of a kitchen, dining room, living room, bathrooms and a garage, Prime Minister Hinds expressed appreciation that the developer of Windsor Estates, Navigant Builders Inc, can meet the housing needs of the diaspora and even locals.

Navigant Builders Inc Chief Executive Officer Danny Sawh, a U.S. based-Guyanese entrepreneur said Windsor Estates seeks to bring a new style of living to the Guyanese populace based on designs developed in North America. During the construction process, keen attention will be given to details and quality. Additional persons who capitalise on the offer to be part of the Windsor Estates family will be given a five-year warranty on the foundation and the exterior of the house, in addition to a 10-year warranty on the roof.

Navigant Builders Inc is currently situated at Bel Air Park, Georgetown; however, it is the sister company of Stonewall Contracting Corporation in College Point, New York. Windsor Estates is optimistic about providing a new quality of living to Guyanese through the provision of a superior environment parallel to that of the U.S.

According to Navigant Builders Inc, the initial phase of its gated community includes the provision of spacious living quarters that will receive 24-hour security, via the gated entrance, street lighting and night-vision Closed Circuit Television (CCTV) cameras strategically placed in key locations of the community. The North Haven homes range from $25 million onward. NAVIGANT Builders hosted the media and invited guests at a glitzy event, as they launched Windsor Estates, a Florida-style gated community on Saturday. The guests included Prime Minister Samuel Hinds and his wife, as well as owners and prospective new owners. CEO, Mr. Sawh taking Mr. & Mrs. Hinds on a tour of the house

The housing project,which occupies 25 acres and will comprise two phases, is located on the Haags Bosch Road, at the back of Eccles, East bank Demerara. A total of 71 houses will be built during each phase.

The launching ceremony included a key turning, after which guests were allowed to tour the one completed house. The house, a double story unit is beautifully finished, and features an open plan layout which creates a feeling of space. Everyone I spoke to were equally impressed by the quality of the finishes, as well as the furniture which perfectly matched the interior.

On hand to lead the guests through the home was CEO and owner of Navigant Builders, Mr. Danny Sawh, a US-based Guyanese entrepreneur. According to their website, Navigant Builders, the developers of Windsor Estates and headquartered in Bel Air Park Georgetown, is a subsidiary of Stonewall Contracting Corporation in College Point, New York.

Stonewall has been in business since 1990 and has completed numerous high- profile, award-winning public and private projects ranging from US $100,000 to US $40,000,000, including new schools, courthouses, underground train stations, hospitals, theatres, playgrounds, police facilities, public housing, a multimillion dollar high-end restaurant in Rockefeller Plaza in NYC and a 3.5 million dollar high-end residential home in Westchester, New York.

The development at Windsor Estates will, besides the 142 houses, contain several features not seen in any gated community in Guyana. These include a Recreation Park, a Playground, a Walking Path, a Water Fountain, a Club House, a Swimming pool, a Game Room, a Movie Room, a Video Game Room, a Lounge Room and a Roof Top Bar.

For the peace of mind of residents there will be street lamps as well as 24-hour security with a guard service at both gated entrances, complemented by CCTV cameras, and a sophisticated infrared security system mounted on top of the perimeter fence of the entire development.

Interested buyers will be able to look at 3D Floor plans when making a selection. According to Mr. Graeme Alli, the operations manager, the houses will be offered semi furnished, with the bathrooms and kitchens already fitted with top of the range appliances.

Mr. Alli also noted that the houses are being built according to US specifications and that 75% of the materials will be imported from the United States. Those who are interested can contact Navigant Estates in Barima Avenue, BelAir Park.

After touring the “Heritage”, a luxurious 1900-square-foot two-storey, three-bedroom house, inclusive of a kitchen, dining room, living room, bathrooms and a garage.Navigant Builders Inc Chief Executive Officer Danny Sawh, a U.S. based-Guyanese entrepreneur said Windsor Estates seeks to bring a new style of living to the Guyanese populace based on designs developed in North America.
During the construction process, keen attention will be given to details and quality.Navigant Builders Inc, has indicated that the initial phase of its gated community will include the provision of spacious living quarters that will receive 24-hour security, via the gated entrance, street lighting and night-vision Closed Circuit Television (CCTV) cameras strategically placed in key locations of the community.The North Haven homes range from $25 million onward.